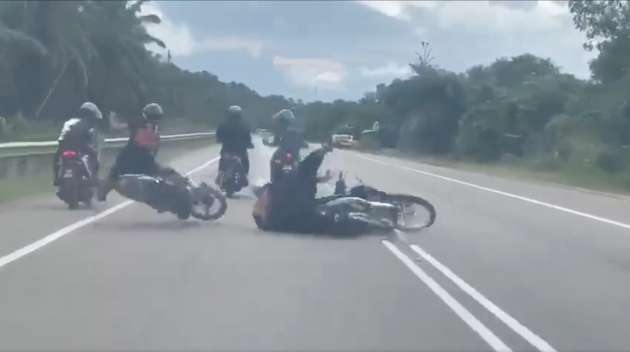 Among the myriad motoring experiences, motorcycling brings its own unique brand of joy. The sensations of facing the wind as you ride along, in addition to the unique motions involved in navigating any given path on two wheels is quite special. Add to that the company of good friends, and enjoyment is almost certainly to be had.

However, try to not get carried away. As this video posted to Twitter shows, what appears to be a group of friends on several motorcycles are travelling in a tightly spaced group, and the front group of four appear to be engaged in conversation while riding.

It isn’t completely clear from the footage if the motorcyclist at the rear of the pack is part of the roving group, though he will eventually collide with another rider from said group, who had slowed down from his initial position at the front of the pack. The two who collide with each other, make contact at the back of the group, in direct view of the camera vehicle.

There are several lessons to be learnt here. Firstly, we should be mindful of other road users immediately around us, which in the case of this group of motorcyclists, would be the motorists directly behind them.

Signals are inevitably required at some point when motorcyclists travel in a group, however communication that requires drawing sight away from the road ahead should be minimised. If the group must have a discussion at length, pull over where there is ample room for the group to safely stop, where possible.

When riding close to other vehicles in a group, a sufficient following distance should be maintained, particularly if the preceding group of road users appear likely to be making unusual moves, as with this group of motorcyclists chatting among themselves and who are unable to maintain road position as a result.

The last point is the most important, as it is regarding the most important item in a motorcyclist’s equipment list – the helmet. Sadly it appears that the helmets of both riders involved in this crash have flown off just about immediately upon the rider making contact with the ground, which means that the helmets have not been securely fastened, leaving their heads completely exposed as both riders continue to tumble.

Always ensure that your helmet is securely fastened, and to begin with, ensure that the helmet you wear is fit for purpose, which is to protect its user’s head. Above all, ride to live, and take all necessary precautions so that you can enjoy arriving at your next waypoint and destination without material damage, injury, or worse.